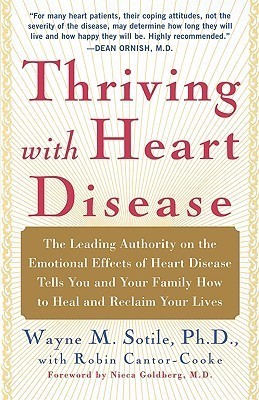 Thriving with Heart Disease: The Leading Authority on the Emotional Effects of Heart Disease Tells You and Your Family How to Heal and Reclaim Your LivesWith Wayne M. Sotile, Ph.D.

From Chapter 8: Defuse Your Anger Before It Kills You

Anger isn't healthy for anyone, but for a recovering heart patient, getting good and angry is like playing Russian roulette: maybe nothing will happen but, if it does, it could be explosive. lf you have heart illness, a bout of anger more than doubles the chances that you'll suffer a heart attack within two hours of the episode. And, unlike depression, which some patients say they cannot relate to, everyone knows what it's like to be angry.

Everyone has a memory, vivid and tinged with red, of when he or she lost control and got really angry. (Some of us have even more than one.) It may have happened at work, or at home, or standing in line at the bank. Perhaps you directed your rage at your kids, or the person with whom you share your life, or the hapless retail clerk who informed you that your order actually hadn't come in after you fought rush-hour traffic to get to the store after work. You no doubt had a right to be angry; you did the right thing, and you expect others to do the right thing, too. Only they seldom do, and you're left to deal with their incompetence, insensitivity, and stupidity.

Behavioral psychologists, who spend their lives studying this kind of thing, say that anger is the emotion hardest to control. And it's no wonder; there isn't much incentive lately to keep your temper when so many of us are losing it for a living: alleged adults pummel one another on talk shows, rap musicians growl venomous lyrics at angry young fans, and political commentators lob verbal grenades at one another and call it news analysis. Popular culture (not to mention TV ratings) thrive on public displays of bad manners, ill temper, and rage, so why should any of us even examine our cynicism and anger, let alone try to control them?

Because they're hurtful at best and fatal at worst. A landmark cardiology study determined that if any of the following descriptions apply to you, you may be suffering from a life-threatening condition:

Do relatively minor mistakes by others irritate or anger you, and do you find such mistakes hard to overlook?

Do you frequently look for flaws in people and situations, and search for what might go wrong?

Are you often unable or unwilling to laugh at things that other people find humorous?

Are you overly proud of your ideals and standards, and do you revel in telling others about them whether or not they ask?

Do you tend to believe that most people cannot be trusted and that they are generally motivated by self-interest?

Do you feel contemptuous of others?

Do you regularly steer the conversation toward what is wrong with the world, the current administration, the older and younger generations, the poor, the rich, immigrants, corporate America, and anyone who isn't you?

Do you pepper your speech with obscenities?

Is it hard for you to compliment or congratulate others with sincere
good will?

If these characteristics sound too much like home, the life-threatening condition you may have is Type A behavior pattern. According to cardiologist Meyer Friedman and his colleagues at the Recurrent Coronary Prevention Project in San Francisco, failure to control any of these tendencies can fuel free-floating hostility, the most toxic component of the Type A syndrome, which every heart patient should be wary of.