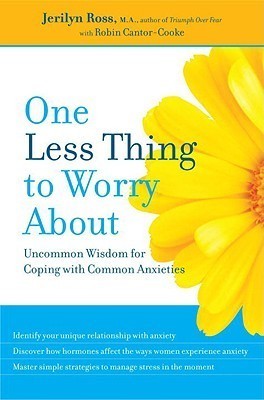 One Less Thing to Worry About: Uncommon Wisdom for Coping with Common AnxietiesWith Jerilyn Ross, M.A.

The idea for this book came to me in a gallbladder—my husband's gallbladder, actually.

I was waiting for Ronnie to come out of surgery to remove a whopper of a gallstone that had shown up during a routine physical. The doctor had said we could leave it alone and maybe nothing would ever happen, or he could operate and take out the gallbladder and Ronnie wouldn't have to worry about needing emergency surgery someday. Now, when I go to the doctor, I ask ten million questions; the more I know, the less anxious I feel. But my husband is a practical man. He needs only just enough information to make a rational decision. "Why take a chance?" he said. "It’s a simple procedure; why would I want to be traveling through Europe and suddenly find myself in a foreign hospital in agony? Let's do it. When can we schedule the surgery?"

Which is how I came to be sitting in a room with about a dozen other people, all waiting to either go in for surgery themselves or hear about how their loved ones had weathered their procedures. I was mildly anxious but not overly so; I knew Ronnie's surgery wasn't risky because I had pelted the doctor with questions: "Does he need his gallbladder for anything?" (No.) "What does laparoscopic surgery entail?" (Several small incisions, very simple, very routine.) "How long will the surgery last?" (An hour; hour-and-a-half at most.)

I like information when I'm anxious; it comforts me. It provides a framework on which I can layer facts and opinions and second opinions that enable me to make good decisions. As Ronnie's surgery approached, I learned everything I could about gallstones, gallbladders, and anything else the surgeon happened to mention. I am pretty familiar with my anxiety (after thirty years as an anxiety professional, that's no surprise) and I know that when I'm anxious, information is my friend: not only does it enable me to understand what's going on, but it also helps me ensure that my loved ones are getting the best possible care.

I had carried with me into the waiting room a satchel containing a bundle of magazines and newspapers, a P.D.A. full of e-mails that I needed to answer, a novel, a container of almonds, a bottle of orange juice, and a stack of journal articles I had to read for work. I had brought all this stuff because I didn't think I’d be able to sit and concentrate on any one thing, and I was right. I opened the novel, stared at the same sentence for five minutes and put it back; pulled out Newsweek and then The New Yorker, read a few paragraphs, put them back; took a sip of juice; prodded my P.D.A., glanced at an e-mail, put back the P.D.A.; grabbed The New York Times, looked at the headlines, opened it, closed it, and thrust it back into the satchel. Losing myself in reading wasn't going to work; I wanted to be occupied but present, somewhat distracted but available to see the surgeon the moment he entered the waiting room.

That's another thing: I'd chosen a chair that faced the elevators so I could see who ever was coming off. From where I was sitting, not only would I see the surgeon as soon as the doors opened; I'd be able to study his expression so by the time he reached me, l would be prepared for the news, any news, that he might have. lf he looked happy, I could leap from the chair with joy; if he looked grim, I could brace myself for bad news. I could imagine either outcome, but I simply could not imagine sitting with my back to the elevators because I knew when those doors opened and the surgeon strode out, I needed to be the first one to see him.

The doors slid open; no sign of the surgeon. I checked my watch and saw that the hour was up. What was taking so long? Was everything okay? I approached the perky woman behind the check-in counter.

"Gee, it's taking longer than I thought," I said.

"The doctor reserved the operating room for two hours. Sometimes things go slower, or they may have started late." She smiled brightly.

I returned to my seat. They said it could take ninety minutes and only an hour had passed, so there was no reason to worry. None at all. In my rational mind, I knew that everything was probably fine, that surgery is a complex undertaking and there was no reason to think that everything would be finished after only an hour. Even so, something could go terribly wrong: an unexpected growth, a problem with the anesthesia, a hemorrhage…

I looked around the room. A middle-aged man sat near me reading The Washington Post, eyes flicking across the neatly folded panel of newsprint. Across the room a woman sat several chairs away from a boy of about fifteen, whom I took to be her son; because of his pronounced limp and wincing when they came in, I figured he was the patient. He sprawled in his chair, legs outstretched, eyes and thumbs darting about a hand-held gaming system. His hair was unkempt and his jeans looked as if they had not been washed for a month. Woman and boy neither looked at nor acknowledged the other; had I not seen them arrive, I would not have known they were together. It was obvious that they were both dealing with their anxiety in the way that adolescents and parents do when, for instance, they are watching a movie and ambushed by a sex scene: suddenly there's an elephant in the room and everyone slouches down in his or her seat and stares straight ahead until the agony passes. This kid seemed oblivious to where he was and why he was there until a uniformed nurse approached him and he jumped up, grimacing. His mother, who had seemed equally oblivious, also leapt to her feet and stood beside him protectively.

There was a woman who had been talking nonstop on her cell phone since she entered the room; another sat silently twisting the rings on her fingers. A man in work boots pulled a pamphlet from a display, sat down, read it, returned it to the rack, then took another and repeated the cycle all over again. It was fascinating to realize that we were all in this room, waiting and anxious, yet no two people were exhibiting the same behaviors.

My gaze drifted back to the man with the newspaper. He was well dressed and seemed no more troubled than if he were waiting for a train. He held the paper the way people do on a crowded subway, folded in half lengthwise and then again the other way so it formed a neat rectangle of newsprint. I watched as he started to read a story, smoothing the paper with his hand and unfolding and refolding the pages as he read each column. Then, when he finished a story, he unfolded the paper. opened it to the next page, refolded it into a rectangle. and began reading again. His movements were deliberate and economical, and I watched him repeat them as he made his way through the news section and then on through Metro and Business.

I was amazed. How can he sit there reading? I wondered. He must be waiting to hear about someone important to him; why is he so detached? How can he concentrate? Doesn't he care? lf he's so unconcerned, why is he even here?

©2009 by Jerilyn Ross and Robin Cantor-Cooke, all rights reserved.